Eye9ja reports that a piece of pictorial evidence published on the micro-blogging site, Twitter by Angula Bishop Reuben, shows a credit alert from a Nigerian commercial bank supposedly paid by NYSC as his January allowance.

Although the credit alert was received on a Saturday, Reuben uploaded a screenshot of the alleged alert with the caption: “BREAKING: New NYSC monthly allowance is now N31,800. Thank you President @MBuhari,” he tweeted. 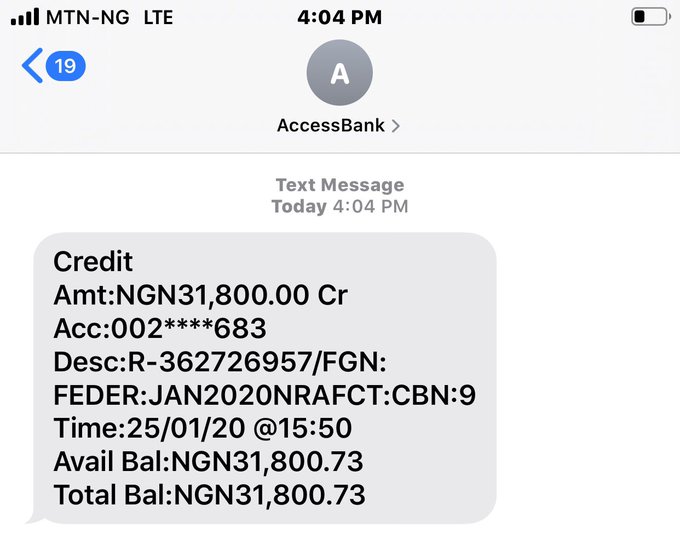 30 people are talking about this

Although, Eye9ja as at the time of this report, was unable to confirm the said N31,800 monthly NYSC allowance 2020, this online news medium, however, recalls that the NYSC DG had said in December, said that Corpers will receive the new minimum wage as allowance starting this year 2020.

This online news platform recalls that the NYSC DG had said in December noted that the allowance of corps members was being reviewed to reflect the new minimum wage of N30,000 per month by 2020 as it had been captured in the 2020 appropriation bill which was yet-to-be-assented by President Buhari at the time.

“Once signed into law by Mr. President, payment will commence. The Hon Minister of Youth and Sports Development reiterated this too when he addressed the Corps members in Lagos,” the NYSC boss had said in December.

Similarly, the Minister of Youth and Sports Development, Sunday Dare, has in a related statement released from his media office during his visit to NYSC camp in Iyana-Ipaja, Lagos State in December, confirmed that the payment will commence in 2020.

“Allowance of corps members would be reviewed to reflect the new minimum wage of N30,000 per month by 2020. The figure has been captured in next year’s budget,” the Minister had said earlier.