by Jake Clifford 1 year ago1 year ago
2kviews 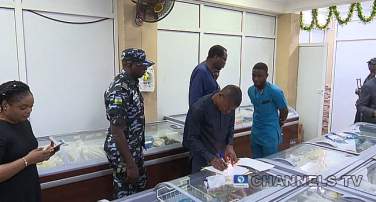 The Federal Competition and Consumer Protection Commission has shut down Panda Supermarket in Abuja for its alleged sale of illegally imported seafood and meat.

Channels TV report that, according to officials of the agency, they made the discovery during a “surprise” inspection carried out on Monday.

They noted that many of the products found in the supermarket had irregular or expired dates.

Consequently, the Director-General of the commission, Mr Babatunde Irukera has promised to carry out further investigation on the markets.

The closing of the supermarket also comes amid fears about the spread of the Coronavirus.

The SARS-like virus has claimed several lives since its emergence on December 31, at a market in the Chinese city of Wuhan.

So far, it has spread to border countries like Japan, Thailand, and South Korea, as well as the US, Canada and Germany.

This has prompted other countries to be on high alert and to put measures in place to prevent further spread of the disease.

In Nigeria, the Federal Airports Authority of Nigeria (FAAN) has advised passengers and airport users to submit themselves for routine quarantine checks whenever they are asked at the nation’s airport.